“We hope we’re better organised about finding a new No.1 this time” | The Busby Way

“We hope we’re better organised about finding a new No.1 this time” 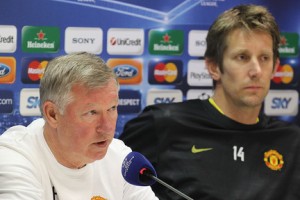 With Edwin Van Der Sar confirming that he will indeed hang up his gloves at the end of the season, Sir Alex has paid tribute to the goalkeeper.

Sir Alex stated in December he expected this season to be Van Der Sar’s last and the Dutchman confirmed this yesterday via a statement to his management company.

In Edwin we finally found a replacement for Peter Schmeichel and Sir Alex is more than aware of the job Edwin has done in his 6 years here. Speaking at Old Trafford this morning he heaped praise on his keeper saying:

“The impact he’s made as a professional is the one thing I’ll always remember about him. He’s had a fantastic career and is a really special man. There will always be comparisons between Peter [Schmeichel] and Edwin – in my time they’ve been the two outstanding goalkeepers, not just here but in football.”

Lofty praise indeed as the pantheon Schmeichel is placed in by most is one that most keepers will never be able to reach and it is because of Edwin’s work here and the impact he had when he came in that Sir Alex is weary about replacing him. United famously brought in a string of keepers with varying success after Schmeichel left in 1999 until we finally found some one reliable and capable of being the #1 in Edwin in 2005. Sir Alex continued:

“We hope we’re better organised about that [finding a new No.1] this time.”