Standing up for change at Old Trafford | The Busby Way

Standing up for change at Old Trafford 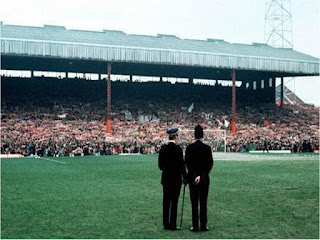 When you look over what Manchester United have achieved over the past 20 years, it is almost overwhelming.  Unprecedented success.

However, looking past all the trophies, world class players and even Sir Alex Ferguson, there has always been something that has gradually dwindled away.  Each season you can almost see it disentigrate right before your very eyes.  Old Trafford’s atmosphere.  Where has it gone?  It’s disheartening to say the least.  I hear tales of when it used to be rocking.  Week in, week out. Flags, scarfs and songs.  It facinates me to think of Old Trafford in that way.  I have briefly experienced something like this when sat in the Stretford End but only rarely does it ever spread throughout.  Even rarer still is it ever happening when it isn’t a ‘big game’.  I’m tired of nostalgic tales, I want it myself and I know I’m not alone.

The ‘big game’ theory is one that I, personally, feel is one of the most damaging in terms of atmosphere.  Strangely enough, it is also one that has come straight from our own support.  It dawned on me before I went to the match against Stoke City in January.  I was browsing the blogs and websites and came across people discussing their attendance for the match.

“Not going tonight.  It’ll just be a shit home league game.  I’m waiting for the big one! Liverpool, cannot wait!”

When did this attitude start to creep in?  A snobbery towards the quality of opponent, as if that is a factor in your decision to go and watch your beloved club.  Surely the main attraction is going to Old Trafford and watching your heroes play?  I completely understand that games like Liverpool are to be looked forward to but I can’t say that I have ever not looked forward to going to any game.  I still get that same feeling of giddy excitement when I walk up the steps and look out over the pitch, whether we be playing Barcelona or Burnley.  I’m not quite sure how any fans wouldn’t?  We need to look forward to every game, go to the ground wanting to get behind the team and come away satisfied with another three points knowing that, in your own way, you’ve contributed.

Many fans I overhear complaining always comment on the ridiculous music played over the tannoy prior to the match.  I have to admit that I also despise hearing ‘Glory, Glory Man United…’ being blasted out.  It contributes nothing other than to make fans bury their heads in programmes and fanzines.  The club will continue to play it though as most fans like to wander to their seats about 5 minutes before kick-off.  This leaves the stadium empty and devoid of any type of atmosphere.  Why not come in early and build it together?  I’ve never understood it.  It would be inspiring for other fans and, I’m sure, the players in the dressing room.  2 o’clock onwards; flags, scarves and songs.  I’d love it and, most importantly, it would work.